Since our last video posting, many of the videos on our lab’s Youtube channel have gone viral. As of this blog post, the video of Inermia vitatta has accrued over 120,000 hits and has been featured on TV programs and newspaper articles around the globe. Not bad for a small fish!

Sometimes, these anadromous stickleback will travel to a newly-formed lake or river, and instead of returning to the ocean, some fish will stay in freshwater, founding a new population of freshwater stickleback. Over time, this freshwater population will evolve to better match its new freshwater habitat.

If we study how this anadromous stickleback captures prey, and then study how freshwater stickleback catch prey, we can learn a lot about the process of adaptation. I’ve devoted much of my PhD work to studying this system, and I’ll be talking more about it in future posts.

This week, the Wainwright blog returns to a topic of perennial interest, the threespine stickleback. I will discuss a recent paper from the Schluter lab at UBC on color plasticity and background matching in stickleback.

To set the stage, it’s important to realize that from a stickleback’s perspective, “bird” is a four-letter word. Predation by diving birds like grebes and coots is commonplace in many freshwater stickleback populations. Unlike predatory dragonfly larva, which detect prey by vision and by water movement, diving birds generally detect their prey by sight alone. In other words, if you’re a freshwater stickleback, it’s very important that the top of your body blends in with your surroundings.

This stickleback didn't get the memo. (http://www.lifeontheslea.co.uk )

The authors suggest that the patterns of color chance exhibited by benthics and limnetics are probably adaptive. Their spectrometer data indicates that the benthic habitat is more variable in color, and their background experiments show that benthics are better at rapidly changing their colors to match the background. The limnetic habitat, on the other hand, is much more uniform, so there would be little incentive for limnetics to evolve rapid color matching. However, limnetics may be adapting to their light environment in an entirely different way:  the  “flickering” exhibited by limnetics could be an adaptation to fluctuating light intensity in open water.

After reading this paper, I’m particularly curious what the color-matching abilities of the ancestral marine sticklebacks are like. If they resemble the limnetic, then this color matching ability will be another interesting benthic stickleback adaptation. It will be cool to see if it is possible to discern the genetic basis for this shift in plasticity.

Stickleblog: Caught in the act

This week, I’m going to discuss a cool paper that came out of Dolph Schluter’s lab in 2008. The paper zooms in on a particularly interesting part of stickleback evolution, the transition between an ancestral marine form that breeds in fresh water to a population that lives in freshwater year-round.

Usually, (and this is one of the “color-coded for your convenience” things that make stickleback a fantastic model system) you can get a good idea where a stickleback is from by looking at its armor plates. Stickleback from marine habitats tend to have a full complement of plates, whereas sticklebacks from freshwater habitats will have few to no plates:

The authors sorted through hundreds of marine stickleback to find fish that had intermediate numbers of plates, which signified that they were heterozygotes for the gene that governs plate number, Eda. These fish were placed in experimental ponds and allowed to breed. Because the fish were heterozygotes for Eda, they produced offspring with high, medium, and low plates, which gave the authors a chance to observe if natural selection favored the low-plated form in freshwater.

In each pond, the frequency of the low allele increased over time, and in a similar way. There was a slight dip when fish were very young, but then frequency increased until the fish reached breeding condition. Interestingly, fish carrying the low allele grew faster and reached breeding condition sooner than fish carrying the high allele, probably because building armor plates takes energy that could be spent on growing more quickly.

The story is more complicated than that, though – not only is there a period early in life where the high allele appears to be favored, but there is also a point where fish with intermediate plates have the highest fitness, which is difficult to explain. The authors raise the possibility that the Eda gene that controls plates in stickleback may affect other traits (pleiotropy). Either way, it looks like even the most well-understood stickleback phenotype has more to tell us. 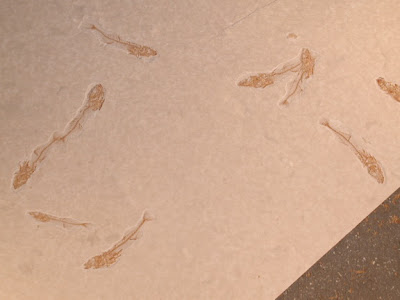 Some weeks ago, I discussed a large phylogenetic study that separated sticklebacks from the seahorses and pipefishes – today I’m going to discuss a phylogenetics paper that zooms in on the relationships between different sticklebacks(and their very closest relatives).

Many of the same scientists from the earlier stickleback phylogeny were involved in this paper, though there is one new face, Yale’s Tom Near, a longtime Wainwright Lab collaborator and former CPB Postdoc.

The group sequenced the mitochondrial genomes of all nine sticklebacks and stickleback relatives, and they also sequenced 11 nuclear genes. They used both maximum-likelihood and Bayesian methods to estimate a phylogenetic tree of sticklebacks.

Here’s what they found:

The mitogenome and nuclear gene data dovetail beautifully, as do the maximum-likelihood and Bayesian methods for each dataset, so there’s every reason to feel confidant about this arrangement of species.

There are a number of interesting results here: Aulorhynchidae, the family that includes the tubesnout, turns out to be paraphyletic – perhaps the Aulorhynchidae should be folded into the family Gasterosteidae and considered proper sticklebacks?

The thing I find the most interesting is the phylogenetic position of Spinachia spinachia, an elongated stickleback similar in appearance to the tubesnout. The paper suggests that perhaps Spinachia‘s elongate form is the result of convergent evolution.

It’s also worth thinking about the geographical distribution of stickleback in the context of this phylogeny: Spinachia and Apeltes, two Atlantic Ocean-only species, are grouped together, while the most basal stickleback relatives are all found in the North Pacific.

There are some interesting future directions possible here as well. One of Tom’s specialties is using fossil data to calibrate phylogenies, so it’s likely we’ll see a phylogeny in the near future that gives us an idea of the timescales of major stickleback divergence events.

Stickleblog: Get ready for sticklebacks!

This is the first installment of a weekly feature on the Wainwright Lab blog.

First, a little introduction: My name is Matthew McGee, and I’m a graduate student in the Population Biology program at UC Davis with Peter Wainwright.

(For those wondering, Peter is the derived fish on the left.)

The species I’m primarily interested in is the threespine stickleback, Gasterosteus aculeatus (which I generally refer to as just “stickleback”, because they’re much more commonly used in research than the other stickleback species).

My research deals with stickleback functional trophic morphology and evolution; or put another way, how the food sticklebacks eat shapes their appearance and how they change over time.